Historic Lexington Foundation has begun an effort to document slave dwellings in Rockbridge County as part of an effort to encourage their preservation.

On Oct. 30, 2019, representatives of HLF and the Brownsburg Museum, together with officials from Virginia Humanities, visited four slave dwellings in the Brownsburg area. The structures were photographed and measured as an initial effort at documentation. Participating on behalf of HLF were President Suzanne Rice and Executive Director Don Hasfurther. 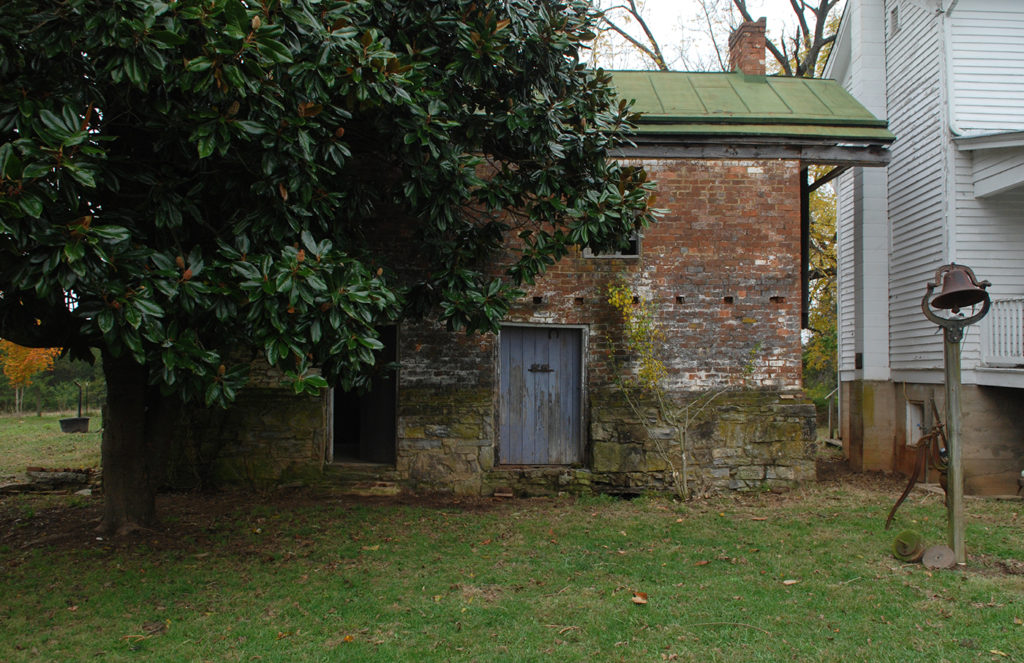 A slave dwelling at Whitehall, the 19th century home of Henry Boswell Jones near Brownsburg, VA.

Virginia Humanities has been documenting slave dwellings throughout Virginia but primarily in Tidewater and the Piedmont sections of the state. The organization was founded in 1974 with funding from the National Endowment for the Humanities. Instrumental in its founding and serving as its first executive director was Washington and Lee University graduate Robert Crews Vaughan III. He was appointed by then University of Virginia President Edgar Shannon, also a W&L graduate and Lexington native. 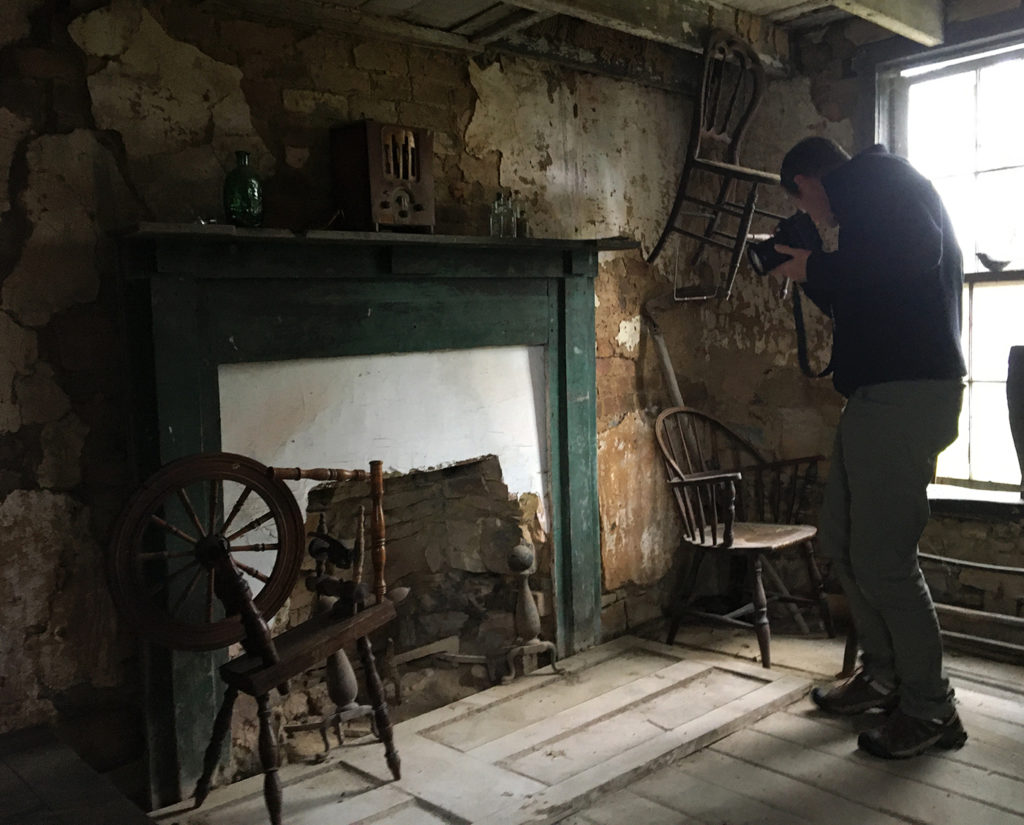 The visit to the four structures in the Brownsburg area was arranged by Paul Hahn, Isabelle Chewning and others affiliated with the Brownsburg Museum. Their efforts were critical in contacting the property owners and obtaining permission to access their properties, noted Hasfurther. All owners were pleased to provide access and, indeed, were interested in learning more about the slave dwellings adjacent to their homes, he said.

The day began with a tour of the Brownsburg Museum followed by a visit to White Hall, the 19th century home of Henry Boswell Jones. Jones is best known for the diary he kept between 1842 and 1871. An entry for Aug. 17, 1856, noted that he was “digging a cellar for the Negro house.” This, together with his ledger, provides researchers with important information on his commercial, religious and personal activities.

The slave dwelling at White Hall is two stories with two rooms on each level. There is also a substantial basement that Hill theorized was also lived in, in part because the walls are plastered and whitewashed. She suggested that with some archaeological research one
might have a better idea of other uses of the cellar. While at White Hall, the structure was thoroughly measured and photographed.

It is quite likely that Reid and Hedlund will return to the site to further document the slave dwelling as part of Virginia Humanities “Mapping Virginia’s Slave Dwellings: Preserving Black History with Street View.” Using Google Street View technology, Virginia Humanities is able to film the slave structure and make the images and audio information available to the public, especially students in grades K through 12. This is important as most sites are not readily available for public visitation, noted Hasfurther.

The group next visited c. 1790, 1828 and 1840 Mulberry Grove. According to the National Register nomination, the property was acquired in the 1820s by Samuel Willson. Willson had constructed a large brick kitchen addition, which included a cooking fireplace and loft. As there is no entrance from the kitchen to the main house other then from the exterior, it is likely that it was occupied by enslaved people who did the cooking and house chores.

Not far from Mulberry Grove stands c. 1775 Sleepy Hollow. Like White Hall, the property has a two-over-two brick structure near the manor house. The  two rooms on the first floor, like White Hall, have separate entrances indicating that it was probably occupied by two slave families.  As with the earlier visits, the dwelling was measured. The Virginia Humanities officials also photographed the exterior, the interior having been altered and modernized for an
apartment.

The last property to be visited was Castle Carberry, now known as Verdant Acres. As with White Hall and Sleepy Hollow, the property has a brick structure with separate doors for the two ground floor rooms, each room with a fireplace. There is a large attic
but no evidence that it was used for anything. Virginia Humanities took photographs and together with Jobie Hill took measurements.

Following the visit to the four properties, the HLF and Virginia Humanities representatives, together with Jobie Hill, met to discuss next steps to their cooperative efforts to document Rockbridge slave dwellings. Plans are to bring Hill, Reid and Hedlund back to Rockbridge County in the spring to meet with interested members of the community and to discuss their efforts. A longer-term goal will be documenting more slave dwellings and bringing them to the public’s attention on Encyclopedia Virginia.

To further this project, HLF needs the input of area residents who might have a slave dwelling on their property or know of slave dwellings in the county. As such, residents are urged to contact Hasfurther at hlf@rockbridge.net or 463- 6832 with any such information they might have.

While the major effort will involve extant structures, Hill is urging HLF also to include ruins of potential slave dwelling in its efforts. She notes that they will take much less time to document but could still be important to understanding slavery in Rockbridge. 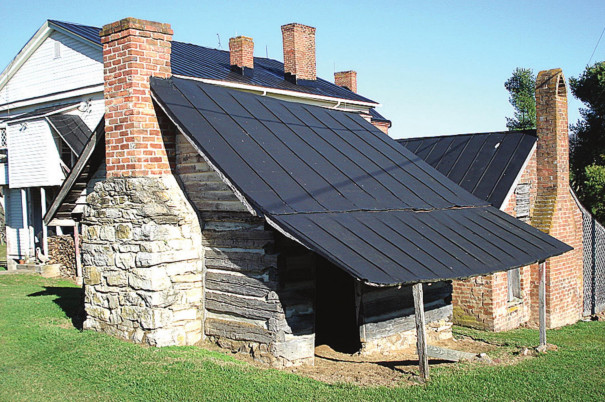 This historic log structure and the adjacent brick slave dwelling is located on the old McChesney farm just south of Brownsburg.

The Brownsburg area is home to numerous standing slave dwellings, and the Historic Lexington Foundation and the Brownsburg Museum began an effort in 2019 to document these structures.

While the structures are still standing, little is known about the enslaved individuals that lived in these dwellings.

A visit by University of Virginia Associate Professor of Engineering David Green to one of the slave dwelling on Dec. 11 helped put a face to the brick and mortar, according to Don Hasfurther, executive director of HLF.

Green and his wife, Karen Sleezer, joined Brownsburg residents and museum affiliates Paul Hahn, Karen Parker and Isabelle Chewing and Hasfurther for a visit to the old McChesney farm just south of Brownsburg. The property owner, Mary Kay, led the group on a tour, including the brick slave dwelling and an adjacent historic log structure. The slave dwelling was the home of Green’s enslaved ancestor on his paternal grandmother’s side of the family.

During an interview conducted by WDBJ 7 reporter Bruce Young, professor Green explained that his father had had a profound impact on his life and his interest in his family’s genealogy. He stated that his great-great-great-great-grandmother, Anne Redd, was a slave who lived at the McChesney farm. Anne Redd was enslaved by Robert McChesney, who gifted her to his daughter Anne McChesney McBride. Her husband, Isaiah McBride, assumed ownership.

During the interview, Green discussed the institution of slavery and the fact that from a generational standpoint it was not all that long ago. Slavery is something that “people really have to get into to understand where we have been if we’re to going to optimize where we’re to go in the future,” he said. 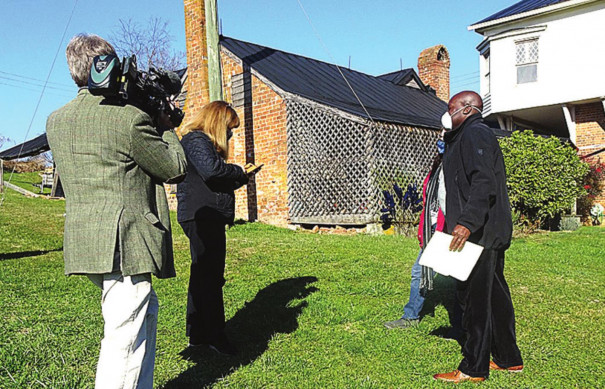 WDBJ 7 reporter Bruce Young photographs an interview with David Green (at right) in front of the slave dwelling where his enslaved ancestor lived on the McChesney farm. With them are Mary Kay (second from left), current owner of the farm, and Green’s wife, Karen Sleezer (behind Green).

Following the visit to the McChesney farm, Hahn took David Green to view the slave dwelling at Verdant Acres, north of Brownsburg. That two-room brick structure is similar to the one at the McChesney farm. The visit concluded with a visit to the Asbury Methodist Church Cemetery where Marie Redd (1841-1925) is buried.

On Oct. 30, 2019, Paul Hahn had arranged a visit to four Brownsburg area slave dwellings, including Verdant Acres, for HLF executive director Hasfurther and then board president Suzanne Rice. They were joined by Virginia Humanities officials Justin Reid and Peter Hedlund and Jobie Hill, preservation architect and founder of “Saving Slave Houses.” Hill is working to document slave dwellings throughout the United States. This documentation effort followed an earlier Virginia Humanities documentation of the slave dwellings at historic Buffalo Forge.

Following the visit to Verdant Acres, known historically as Castle Carberry, HLF approved a grant through the organization’s Lyle-Simpson Preservation Fund for the Pedersen family to replace the roof on the slave dwelling there and provide support for the structure’s interior wall. The structure is accessible to the public, and the Pedersen family hopes to use one room for educational purposes. These were all factors in HLF’s decision to approve the grant.

According to Hahn, once the current pandemic has abated, the Brownsburg Museum and HLF hope to arrange a program for the public to visit the Brownsburg area slave dwellings. He and Hasfurther agree that visitations to these structures would help residents better understand the institution of slavery in Rockbridge County and beyond. The event would be a fundraiser for the two organizations and their efforts to document and preserve area slave structures. 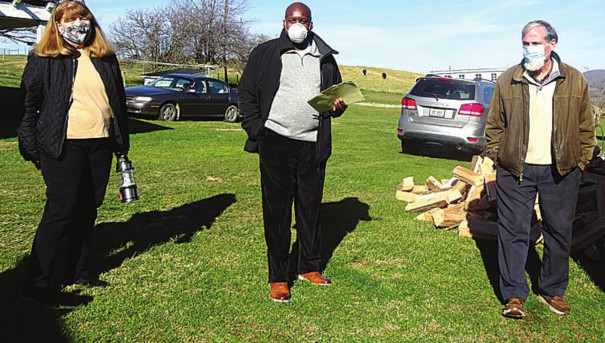