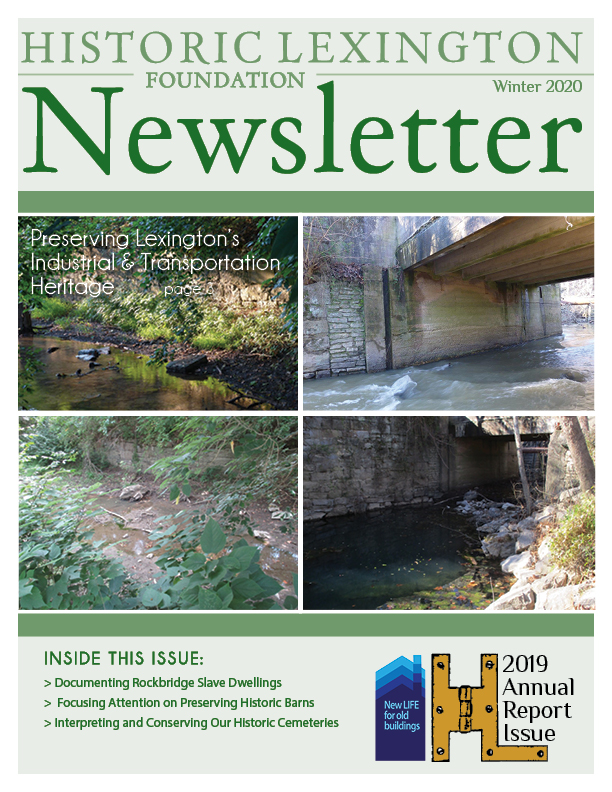 Download the latest newsletter.  The HLF Newsletter is published two times a year and provides a summary of current activities and events.  Click here to see past newsletters. 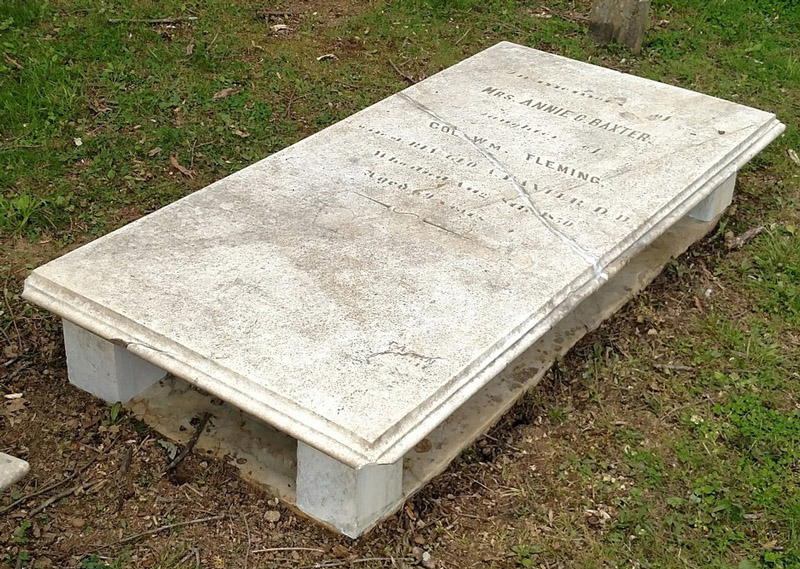 With a generous grant from Mary Coulling of Lexington, HLF arranged restoration of the neglected flat marker at the grave in Stonewall Jackson Memorial Cemetery of Annie Baxter (1781-1850), whose husband, George Baxter, was a longtime Presbyterian preacher, rector of Washington College, and president of Hampden-Sydney College. The Baxters were forebears of Mrs. Coulling’s late husband, Sidney M. Baxter Coulling. 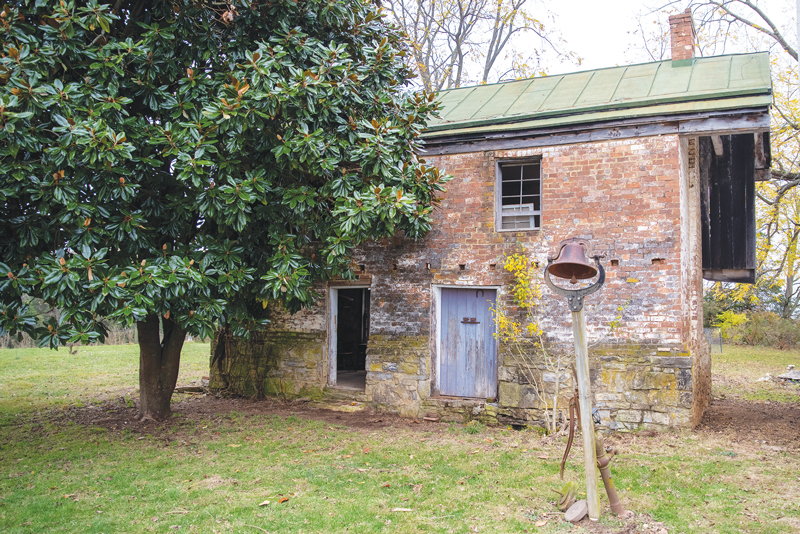 We adopted Rockbridge slave dwellings – specifically, the need to document, protect and preserve those that remain – as HLF’s 2020 focus. The Virginia Humanities project is keenly interested in partnering with HLF, seeing us as the council’s eyes on the ground in Rockbridge. Several council officers have joined HLF in local discussions on the general topic. Here is a description of the Virginia Humanities program, and here is a short video about its results. The photo shows a slave dwelling near Brownsburg in northern Rockbridge County. 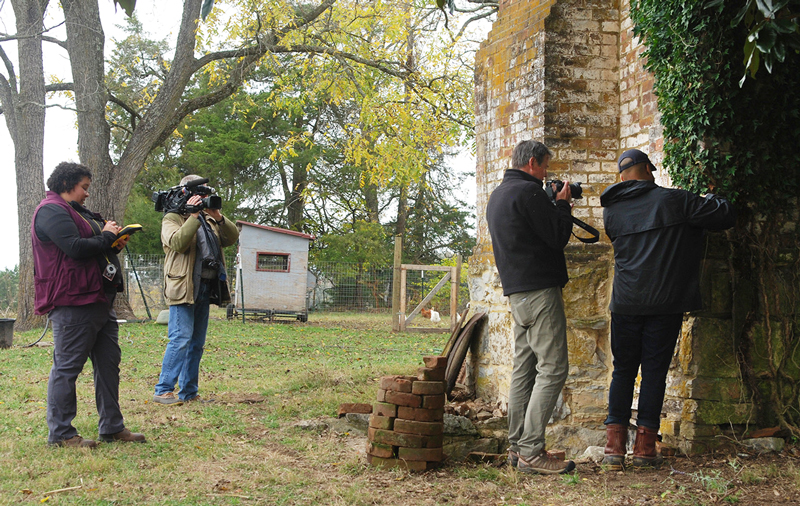 In February we sponsored a well-attended forum on Rockbridge slave dwellings in the community hall of Lexington Presbyterian Church.

Our work in preserving area slave dwellings was part of television feature in October, broadcast on WDBJ-7, the CBS affiliate in Roanoke.  The photo shows Jobie Hill, an architectural historian, recording the measurements of a slave house at Whitehall, near Brownsburg, while the TV video is shot. 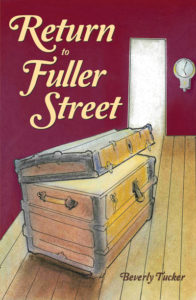 HLF President Beverly Tucker’s newest book, Return to Fuller Street, was published in March.  A first-day reception took place at the First Baptist Church in Lexington, a 153-year-old congregation many of whose members figure prominently in the book. Return consists of a dozen oral history interviews with area residents, many of them now seniors, about Rockbridge in the era of segregation and afterward. Buy the book here or at The Bookery. Read interviews with Wendell and Priscilla Baker, excerpted from the book.  And spend time with Dr. Tucker’s friends from eight interviews in her earlier Lexington book, The House on Fuller Street. 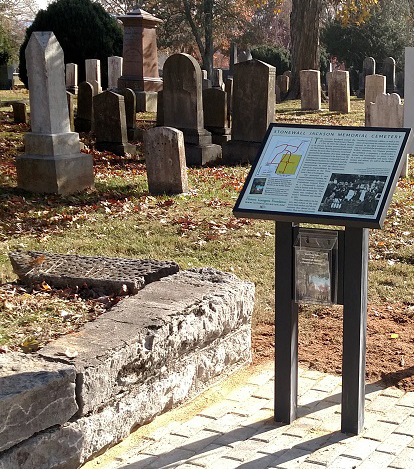 In 2019 HLF created a handsome pedestal, located at the entrance to Stonewall Jackson Memorial Cemetery that explains, in a few words, the significance of the site and the men and women buried there. The pedestal also has a weather-protected clear plastic case to hold copies of our 20-page walking tour for free distribution to visitors.

HLF launched a new Instagram site showcasing remarkable photos – familiar, surprising and sometimes inspiring – that touch at least a little on our mission of area historical preservation and education.

In keeping with our yearlong theme in 2019 of preserving old barns, HLF had its annual meeting at the Old Claytor Barn near Glasgow. Laura Walker spoke on the topic of barn preservation.

“Opening Old Doors,” HLF’s exhibition devoted to area barns — consisting of paintings, photos and artifacts — remained on display at the Rockbridge Historical Society’s Campbell House gallery from June through December 2019. HLF published a small full-color exhibition catalogue, which was given to each visiting family. The catalogue is shown here, and hard copies can be obtained free from HLF’s office.

We also were lead participants in a monthlong exhibition of barn paintings at the Nelson Street Gallery in May 2019.

Other HLF-sponsored events to mark Preservation Month 2019 included an afternoon spent at Maxwelton, near Rockbridge Baths, with a talk by noted local historian Anne McClung on early Valley barns and a discussion of barn architecture by Dan Pezzoni, author of HLF’s wonderful Architecture of Historic Rockbridge. 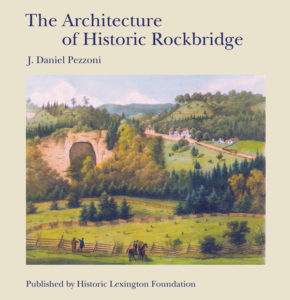 After local governments decided in 2019 to demolish the historic but dangerous dam at Jordan’s Point. HLF has lobbied hard for preservation of at least the mill race. We’ve vigorously continued our advocacy in public and private forums on the topic any number of times. We aren’t done yet! 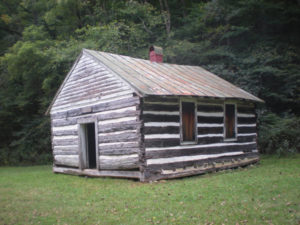 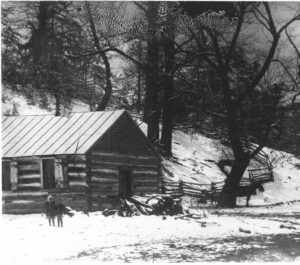 Work has been slowly progressing on restoring the Hamilton School House in southwest Rockbridge. It’s believed to be the oldest standing one-room school in Virginia. HLF awarded a $10,000 grant for a new wood-shingle roof. Photos show the school in 1909 and just before renovations began. 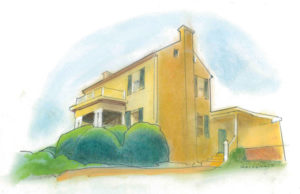 We said Thanks! to our major donors in September at aptly named Grace Hill Farm, the c. 1827 Federal-style home of board member Harry Shannon on Walker’s Creek near Rockbridge Baths. The drawing is by HLF board member Bruce Macdonald.

A new marker was erected at the grave of Capt. John McDowell (d. 1742), a patriarch of the early Rockbridge settlers whose family cemetery is partly maintained by HLF as part of our cemeteries preservation activities. At the dedication ceremony, HLF President Suzanne Rice placed flowers. 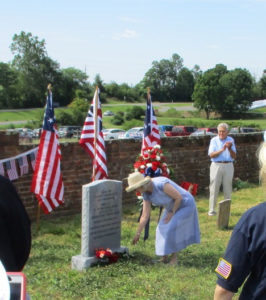 HLF markers designating buildings as having unusual significance have been installed recently on the 1853 erstwhile Troubadour Theater, now a commercial building; the 1868 Edmondson-Penick House on White Street (now owned by Arthur and Margoth Bartenstein); the 1896 mansion on West Preston Street that once was the Trinity Methodist parsonage (restored and now owned by Russ and Mary Stuart Harlow). 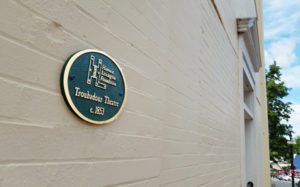 We have begun to think about specific ways HLF might highlight Evergreen Cemetery in our general cemeteries efforts. Evergreen is historically the area’s principal site for African American burials. 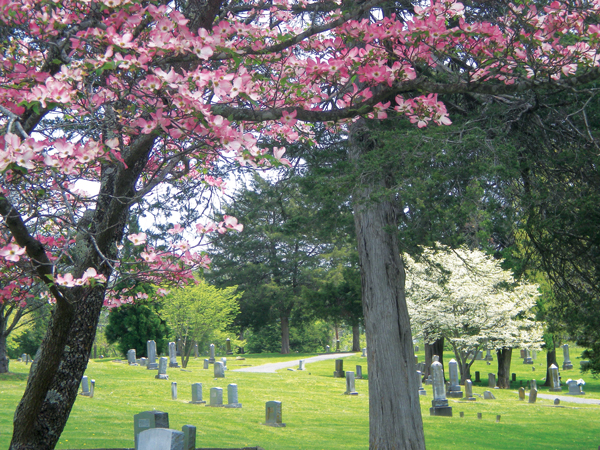 A jam-packed calendar of HLF spring and summer events was upended, as were plans everywhere in the world, by the pandemic. Some of the activities we were working on — many of which we hope to pick up again once events allow — were: